You are here: Home / Blog / Blog / Spring In Vermont

“Never, ever underestimate the importance of having fun.” – Randy Pausch

Happy Memorial Day! Reed (my husband), the pup and I spent a very fun Spring weekend in Northern Vermont. We were lucky enough to stay at our friend’s place in Colchester, which was the perfect base camp for a weekend in the “big city”. Living in Pittsfield, a town of around 400 people, we don’t often get to experience the niceties of urban Vermont, such as Costco, Trader Joes, and good Mexican food. We took advantage of all of those and more over the weekend!

Friday started the long weekend off right with a scrumptious dinner at Toziers and a showing of Super Troopers 2 at the Bethel Drive-In. Haven’t been there yet? GO! It’s one of our favorite local haunts. Who doesn’t love a great drive-in, a school bus snack bar, and watching a film with your dog in the backseat?

Saturday morning we drove up to Colchester, dropped off our stuff, and headed to Saxon Hill Bike Trails in Essex. As Fellowship of the Wheel puts it, “The Saxon Hill trail network in Essex is a classic. The trails are characterized as classic smooth and flowy singletrack. This immensely popular network is home to the Flo, FreeFall, and Extendo trails.” We picked these trails to visit because we hadn’t been there before and because they are dog-friendly! Reed and I like to take our pup, Fin, with us everywhere.

After a fun, flowy ride, we headed back to base camp to get ready for the main reason we were up in the Burlington area for the weekend – to see Fleet Foxes at Shelburne Farms! If you haven’t heard of them before, give them a listen. I discovered their tunes way back in 2008 after the release of their second EP, Sun Giant. The hail from Seattle and are a wonderful indie band with a truly unique sound! One of my favorite songs is “Helplessness Blues”, which you can listen to below. They put on a fantastic show, but what was even cooler was that we happened to see Robin Pecknold (the lead vocalist and guitarist) in the crowd before the show! He was just listening to the opening act and blended in pretty well with the crowd. Reed spotted him immediately however and we just had to shake his hand and take a photo. He was so chill, and very, very nice. The interaction made me love the Fleet Foxes that much more!

Sunday morning, we met up with some our friends to bike once more at Saxon Hill. We clearly hadn’t gotten enough, and they had never been there either. We both brought our dogs, who kept each other quite busy, and tore up the trails again. We then undid all of the calorie-burning we achieved by eating huge and incredible enchilada-style burritos at El Cortijo in downtown Burlington. Seriously, we miss good Mexican food terribly in Pittsfield; this place does the trick. We then spent a ridiculous amount of time in Costco and Trader Joes, munched on Costco Pizza (SO TASTY), and turned in early.

We continued the adventure on Monday by hiking up Mount Hunger. The weather was perfect for the 2,260 foot ascent to the peak – 65 and cloudy. Our dog showed no signs of being tired, and pretty much ran up the entire mountain. The views from the top weren’t as great as we’d hoped, but it was still a beautiful trek!

We ended the weekend by stopping at another one of our favorite spots, Ben & Jerry’s in Waterbury, and enjoyed some good ole’ Vermont ice cream! There is so much to do in the Spring in Vermont. We had a very fun staycation, and hope you enjoyed an adventure-filled weekend as well!

Enjoy exploring our spring adventures through the photos below!

Maple at the Mill 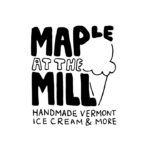